Welcome!  I hope you may benefit from this month's edition of Notes Along the Path.


This may be my longest issue in a while, so feel free to skip to your top priority first.

Today we will be discussing:

In the News
Investor's Business Daily is doing a story about the CSRIC (Chartered SRI* Councelor) designation, which I hold.  Last Week I had a very enjoyable interview with the author and hope to see pubication next month.
*Sustainable Responsible and Impact Investing


The State of Our Nation

When I take a step back from what is happening in the economy and look at the major U.S. market averages, I see an incredible disconnect. And I’m not alone.

U.S. Gross Domestic Product (GDP), which is the broadest measure of the value of goods and services in the economy, fell at an annual rate of 32.9% in Q2 2020, the largest decline on record (U.S. BEA data – quarterly data began in 1947). The prior record, a 10.0% annualized decline, occurred in 1958 and coincided with the Asian flu pandemic.

The contraction can be blamed on the unusually swift decline in the economy that began in March and quickly accelerated in April.

It doesn’t take an economist piecing together a complex puzzle to discover the culprit.  Simply look at the lockdowns that were needed to slow the spread of Covid-19. They stifled economic activity and threw tens of millions of people out of work.

However, May and June saw a significant improvement from these very depressed levels.
The economy generated a record number of jobs in May and June, erasing one-third of March and April’s job losses (U.S. BLS data).

We also saw significant gains in retail sales following a record decline in April (U.S. Census), as businesses began to reopen, furloughed employees returned to work, and stimulus money ($1,200 checks and generous jobless benefits) found its way into the economy.

Nevertheless, the economy remains far below its pre-coronavirus state, as evidenced by the steep decline in Q2 GDP.

Yet the major market averages tell a different story.

As July came to a close, the broad-based S&P 500 Index turned positive for the year, while the tech-heavy NASDAQ Composite is having an impressive year (Table 1). Some of the larger tech stocks appear to be more insulated from the initial impact of the Covid Recession, and investors have taken notice.

The Federal Reserve’s massive response to the crisis, coupled with a robust fiscal response by the federal government, has also encouraged buying. Many investors are looking beyond dismal Q2 GDP and profits.  They are attempting to price in more favorable conditions later in the year and into 2021.

The recession that began in February (per the National Bureau of Economic Research) appears to have ended in April, which would make it the shortest on record. However, it may be months before the NBER, which is the official arbiter of recessions and expansions, decisively calls the bottom.

I don’t want to dismiss May and June’s upturn in the economy. It has been encouraging to see economic activity bounce higher, and millions return to work. Still, the outlook remains unusually uncertain.

As states around the country began to reopen, the number of Covid-19 cases has spiked, injecting a new round of uncertainty into the outlook.
To contain the virus, some states have slowed reopenings, and others have implemented new restrictions.

If we look at what is called “high-frequency data,” such as daily air travel through TSA checkpoints, daily restaurant books via OpenTable, and daily requests for directions via Apple Maps, economic progress slowed or stalled in July.

Further, layoffs remain at historically high levels as measured by weekly jobless claims (Dept. of Labor). Yes, a record number of people are going back to work, but layoffs remain high.

The spread of Covid-19 is hampering the recovery and creating a new round of uncertainty. Might this be temporary? Might new cases begin to slow in August and September? Could we see a second wave in the fall and winter? There are no clear answers.

Today, the path of the economy is linked to the virus. Hence the unusual degree of uncertainty.

Yet, there has been encouraging news regarding a vaccine. If and when developed and readily available, a vaccine could be just the right prescription that could sharply increase confidence to venture back into restaurants, movie theaters, airplanes, and sports arenas.

As Fed Chairman Jerome Powell said in prepared remarks in late July, “The path forward for the economy is extraordinarily uncertain and will depend in large part on our success in keeping the virus in check.”

Social distancing, masks, and all CDC-recommended safety protocols are a step in the right direction. However, a vaccine and effective treatments are, without a doubt, the best way to enhance mobility and move us past this challenging chapter in our country’s history.

The economy may not be the same when the pandemic is eventually in the rearview mirror, but we are a resilient people, we will persevere, and we will adapt. 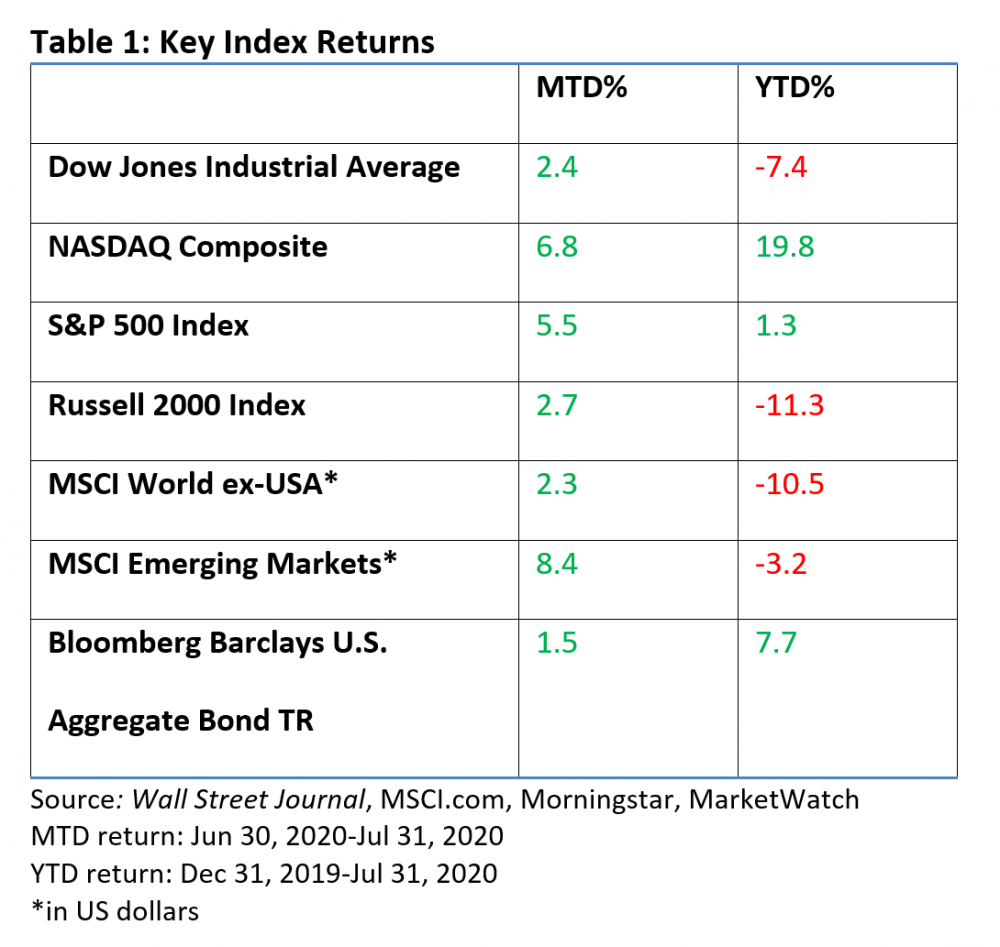 There are many vehicles to choose from as you travel the road to retirement. One of the more advantageous means you may utilize to build a nest egg is the Roth IRA.

A https://www.irs.gov/retirement-plans/roth-irasRoth IRA is an Individual Retirement Account that allows you to contribute after-tax dollars into a savings or brokerage account.

The after-tax dollars won’t allow you to claim a tax deduction as you might on a traditional IRA. Still, withdrawals are not subjected to federal income taxes when withdrawn after 59 ½ years of age, as long as the account has been opened for at least five years.

Like a traditional IRA, interest, dividends, and capital gains are sheltered from taxes inside the Roth.

We are past the tax deadline for 2019, but it’s not too early to begin thinking about 2020. However, let’s be aware of income limits.

If you are married and filing separately, the rules become a little more complicated so let’s talk if you are in this category.

You may contribute to a Roth and a traditional IRA, but you may not exceed the prescribed annual limits.

In addition to tax-free withdrawals, Roth IRAs are not subjected to required minimum distributions.

Further, under the SECURE Act, an inherited Roth IRA (and a traditional IRA) must be distributed within ten years if the beneficiary is not your spouse (in most cases).

Unlike a traditional inherited IRA, the distributions are tax-free. And beneficiaries may let the Roth account grow tax-free until year 10 when the distribution is required.


High-income Taxpayers and the Backdoor Roth

If you have a healthy six-figure income, hard limits prevent you from contributing directly to a Roth. But income limits don’t exist for converting a traditional IRA into a Roth, which leaves a loophole for high-income taxpayers.

Long story short, you may contribute to a non-deductible traditional IRA, open a Roth IRA, convert the contribution into the Roth IRA, and pay the taxes on any appreciation.

Conceptually, the backdoor Roth strategy is relatively straight-forward if you have no other IRAs. If there are other IRAs in your name, taxes are pro-rated. However, many 401(k)s allow you to roll-in your IRA which may allow you to avoid the pro-rated tax.

We’ll avoid getting into the minutiae, but we’d be happy to work the numbers out for you, as that is what we are here for. Or, before considering a Roth IRA or a backdoor Roth, you may want to consult with your tax advisor.


Deadline for Rollovers from Beneficiary IRAs is August 31, 2020

This means that for distributions taken from inherited retirement accounts by non-spouse beneficiaries—except for those directly rolled over as explained above—no rollover is generally permitted.

An exception has been made for required minimum distributions (RMDs) made from beneficiary IRAs in 2020. The IRS made the exception because the Coronavirus Aid, Relief, and Economic Security (CARES) Act—signed into law on March 27, 2020—waived RMDs for defined contribution plans and IRAs for 2020, and some RMDs might have been taken before the Act was signed into law. Under the exception, the RMD is permitted to be rolled over to the distributing beneficiary IRA.

Other Deadline Changes for This Year

The deadline for avoiding the 5-year rule was extended to December 31, 2021, for 2019 beneficiaries.

The deadline for employer plan beneficiaries to elect the 5-year rule or the life expectancy rule was extended to December 31, 2021, for 2019 beneficiaries - but plan amendment is required

An employer plan is permitted to include a provision that requires plan participants or beneficiaries to elect either the 5-year rule or the life expectancy rule when the participant dies before the RBD. This would apply to accounts inherited before 2020

For a non-spouse beneficiary, the deadline for making such an election is December 31 of the year that follows the year in which the participant dies, which would be December 31, 2020, for accounts inherited in 2019.

Notice 2020-51 extends this deadline to December 31, 2021. However, for the extension to apply to a beneficiary, that plan must be amended to permit it. Affected beneficiaries should contact their plan administrators to determine the options available to them.

The 5-year rule is extended to six years where 2020 was part of the original 5-year period.

The CARES Act provides that, because of the waiver of 2020 RMDs, 2020 is not included when counting the five years. As a result, if a beneficiary is subject to the 5-year rule, and the five-year period includes 2020, the five years is extended to six years.

For the last few years, we have been a one-dog house. That era is about to come to an end. We will be taking on my wife's late brother's dog, Argos, moving him here from Santa Fe, New Mexico. She is a sweet yellow lab mix, but we are apprehensive because our dog, Sirius (a people-loving black lab/pitbull mix), is a rescue. We have no idea what his early life was, and he's pretty reactive to other dogs. We are working with a trainer and making progress with him, but we have no idea how they will get along.

Anyone with experience in dog integration, please feel free to offer advice to me.


I hope you've found this review to be helpful and educational.

I understand the uncertainty facing all of us. We are grappling with simultaneous economic and health care crises. It's something none of us have ever faced, and no amount of normalization makes it OK for the millions who are hurting and stressed. We have addressed various issues with you, but there are always questions. If you want to talk at any time, let's have that conversation. That's what I'm here for.

If you like it this newsletter, I encourage you to pass it on to any contacts you have that might benefit.

I remain honered and humbled that my clients have allowed me to serve as their financial advisor.  Thank you for your support.